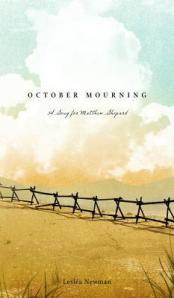 I was moved this evening. To my core. The Trust Theatre Ensemble performed a stage adaptation of Leslea Newman’s October Mourning: A Song for Matthew Shepard. It’s a collection of poems about the horrific night in 1998 when 21-year-old college student, Matthew Shepard, was brutally murdered in an anti-gay attack near Laramie, Wyoming.

The play, staged at the Theater Wit and directed by Lori Thompson, brought us to our knees. It was gut wrenching. It was riveting. Truthful. Elegant. Sobering. And so, so sad. The reality is that none of us want to see or experience bad things. It makes us uncomfortable. It makes us feel muddy and weepy inside. It makes us angry.

None of us want to think about what it must have been like for Matthew as he spent 18 hours tied to that fence, hoping someone would save him. We don’t want to think about the Texas black man, James Byrd Jr., who was dragged to death behind a pick up truck a few months earlier. But we must. We must remember and we must bear witness to the pain we cause one another in the name of hate or God or fear or anger or revenge or whatever drives us to harm and kill one another. We have to see what intolerance does to us as human beings.

We are the same, despite our differences. So, together, let’s take a critical look at the ugly we have created. Let’s find our way back to the tenets of peace, acceptance and love. Let’s start now. Come on. Take a look.